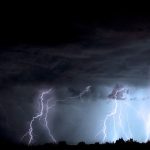 Severe thunderstorms produce lightning, which is extremely dangerous. Though lightning fatalities have decreased over the past 30 years, lightning continues to be one of the top three storm-related killers in the United States. In 2014, there were 26 fatalities from lightning. Although most lightning victims survive, people struck by lightning often report a variety of long-term, debilitating symptoms.

Other associated dangers of severe thunderstorms include tornadoes, strong winds, hail and flash flooding. Flash flooding is responsible for more fatalities—more than 140 every year—than any other thunderstorm-associated hazard. Dry thunderstorms that do not produce rain that reaches the ground are most prevalent in the western United States. Falling raindrops evaporate, but lightning can still reach the ground and can start wildfires.

Before a Thunderstorm and Lighting

To prepare for a thunderstorm, you should do the following:

During Thunderstorms and Lightning

If thunderstorms and lightning are occurring in your area, you should do the following:

After a Thunderstorm or Lighting Strike

If lightning strikes you or someone you know, call 911 for medical assistance as soon as possible. The following are things you should check when you attempt to give aid to a victim of lightning:

After the storm passes, remember the following:

In addition to insuring your home, Rinehart, Walters & Danner Insurance Agency is committed to helping you and your loved ones stay safe when disaster strikes. Severe thunderstorms are a regular occurrence in Ohio and everyone should be prepared. If you would like more information on developing a family emergency plan or building a disaster supply kit, please contact us today.